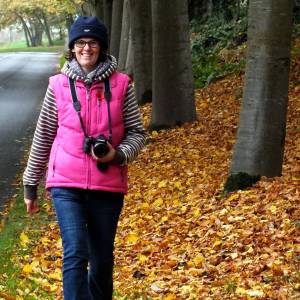 The great tit chicks have flown the nest and I missed most of it. I'm not sure when it happened as it was very thick fog this morning and I thinking about whether family members were going to be able to get away for half-term. Fortunately the fog lifted and the plane was only delayed by half an hour.

I went into the garden and got quite a few nice shots of cobwebs again. As I got closer to the front door I noticed that the mailbox was quiet and wondered if the fledging had started. The parents had been around doing their 'shouty' thing but as we've not gone through this before I thought it was a normal call. Later on I heard great tit tweets coming from the oak tree in the garden so I went over with camera in hand to investigate. Lo and behold I saw two maybe three fledglings waiting for food (see extras)
Just when I thought they'd all fledged there were tweets coming out of the mailbox. I thought maybe the last chick had been forgotten, but no the parents returned calling it out, and it took ages. At one point the poor fledging was on the ground opposite the box looking quite forlorn (see second extra) We stayed inside not to put the parents off and eventually it disappeared, so I'm hoping it flew off to somewhere safe. The birds in the oak have since disappeared so they have well and truly flown the nest!
I'm really going to miss them and feel like I might even have empty nest syndrome, but the bird sized version. ;-)