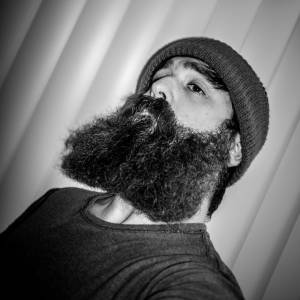 this is Juan Pablo. Juan wears cool cat shirts, rides a Surly with the Night Riders, and is just generally an uberchill dude. Been seeing him around a lot more lately as I myself have been emerging from the semester's depths and getting out for public appearances.

Saw Juan last night at Michael and Mel's bike-in movie/fire-pit session. It is finally getting down in the 40s at night here so being outside, watching a comedy on the big screen with friends is the perfect way to ring in the chilly weekend. Smores were made, beers were drank, peppermint schnapps bottles passed, guitars strummed--'twas a good night. Think Leah's Blip will have something for this when she gets a chance.

So, this morning I ran into Juan again--he stopped by my photography table at the Southside Urban Market and I snapped his portrait. Didn't really sell much as far as my prints go, but that wasn't really the point either. The point was to be outside, drinking coffee, meeting friends old and new, and just generally keeping the balances in my life intact. Leah came by after volunteering at the clinic all morning and helped me tear down, then we went to get tacos together.

The giant Yucatan fried fish burrito turned out to be a slight mistake, as I raced (sort of) in the third annual Trinity Bicycles Cranksgiving alleycat (an eight or nine stop race that picks up Thanksgiving canned goods at each stop, goods to donate at the end). But due to my overeating, some rear tire issues deflation issues (need a patch on my tube--had three slow, soft leaks), and a basic unhealthiness (I excel at excuses), I had to bow out after just two stops. Started off riding with Jay and Michael--last year's defending champ--and found out that Michael finished first again, apparently about 10 minutes ahead of the pack, but due to not properly keeping his receipts from two of the stops (to prove you indeed stopped at each of the stops individually), he wasn't the "official" winner. Anyhow, it's all for a good cause and I think a good 50-60 people showed up.

Back home now, ready to hit the showers, and debating if I'm going to head back out to grab a beer at Zio's where Byron is tending bar tonight. A lot done today and a lot still going on tonight it seems. Choices, choices.

Well, I like how this portrait came out--this lens (as many do) really works its best magic at f/2. Juan liked this one the best, too, of the five I took of him--nice point of agreement there. Cheers for now, friends!