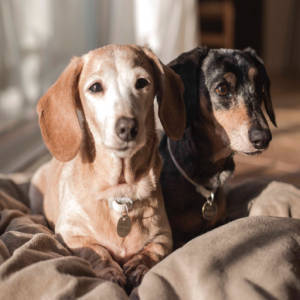 4 months on the Riviera

"Just when you thought it was safe to sit next to a dachshund..."

In reality, 'Jaws' couldn't be further from the truth! Silva and I have been together for nearly ten years now - she came to me at the age of two and a half, after being kept in an outdoor kennel where she was used purely for breeding, and had already had two litters. Very docile herself, she was badly attacked by a large elderly dog five years ago while we were on our usual walk, and nearly bled to death on me after the dog ripped her neck. Happily, though, she survived and as a direct result of the attack, I made enquiries about other rescue dachshunds as I felt Silva needed a companion, and Chilli came bouncing into our lives. The two immediately bonded like sisters, and we've never looked back!