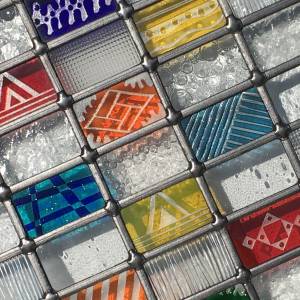 We visited the David Parr House in Cambridge today. David Parr was a working class decorative artist who worked for a Cambridge firm of decorators, Leach & Sons. Over a period of 40 years David Parr also painstakingly decorated his own terraced home in the Arts & Crafts style of the grand interiors he worked on.

The house was lived in by his granddaughter until her death in 2013, after which it was bought and preserved by a charitable foundation and has only recently opened to the public.

These are patterns for the silver-stained glass used in doors and windows produced by Leach & Sons.