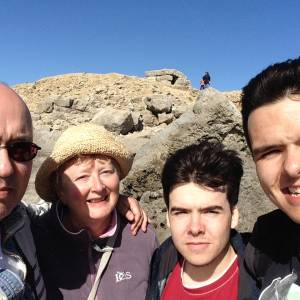 A Day of two halves

We rose early to attend a Dragonfly Walk starting from the Avalon Marshes Centre at Shapwick . It was a very pleasant morning- the leader was very knowledgeable but the dragonflies proved very elusive and it was quite pantomimish at times ‘ its behind you ‘ ! However, we did see some wonderful examples including the huge blue Emperor and the four spotted darter . We passed the ancient Sweet Track which Stan had helped rebuild five years ago - see extra .

We had lunch at the Wholefoods cafe in Wells which we were really ready for as we’d walked about 3 miles. Then we drove over to Kilve which I hadn’t visited for many years . Such a fantastic beach geologically and very popular with families.
There was a police car and coastguard van parked on the cliffs .Whist we were sitting on the beach there were suddenly shouts of “Get off the Beach “ and it turned out that walkers had found unexplored ordnance that morning . The naval disposal people arrived and we were surprised by a sudden explosion !