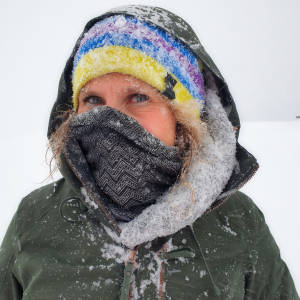 Quite the storm in the past two days, even causing little planes to blow over. As it is due to the Foehn wind, it was 18°C today!

I collected Rike in the morning, who has a little dog holiday with me until Tuesday. Philipp came over to help me hang up some pictures, and we cooked a huge pot of curry together - good for 6 more meals to be taken to work, too.

The dogs got in a fight with a cat in the afternoon. If it had just stayed put as it did first it wouldn't have been a problem, but it decided to run in the last moment, so the dogs went after it. Result was a cat in the tree and a Djeili with a clawed-through, heavily bleeding ear... Sigh... Dogs...Cat was not harmed though!