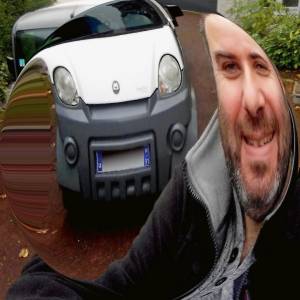 Thou shalt not hit the browser back button accidentally... now got type my entry again.... GRRR...

Storm Dennis is starting to make itself felt this lunchtime, like last week we moved the car and Mega Breadvan down to the end of the drive. Mainly we are a bit scared of the big tree far left, which is in front of our house. If it falls, then it can either damage the house or in another direction the car and Michel's barn next door.

It is going to have to go at some point, as during the passage of Ciara and Inès since last weekend, it is creaking alarmingly.

We used to have a big cherry tree growing over the back of the house. France was hit badly by a storm on Boxing Day 1999 which caused a few trees to either fall over or lean over in our garden. The cherry tree had been weakened by that storm, plus disease, had caused it to start splitting vertically. So it had to go.
We don't miss the half eaten cherries, cherry seeds and bird cr*ap everywhere.

To be honest it isn't the only tree we need to get rid of and over the years we've had to have 6 cut down, just because they were close to the house.