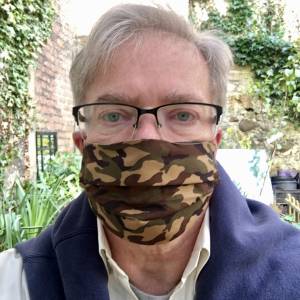 Today was mostly taken up with the routine domestic stuff.

More interesting - yes, you read it here first - was going to a garden centre. There is a small independent one close to the farm shop and it has reopened. I was very impressed with their anti-virus arrangements.

The cafe at the farm shop has re-opened, but for takeaway only. The weather was horrible this morning so I was not going to sit outside with a coffee just for the sake of it. Maybe next week.

Dinner was a steak (venison) sandwich. Apologies to the vegetarians.

It was always a favourite with Junior when he was a youngster. I cooked his steak a wee bit longer than mine, until it was still a bit pink but no blood would ooze out.

Once I got them mixed up, and realised as soon as I took a mouthful of mine. I looked over at him with some concern and asked if his was OK. He nodded because his mouth was full. The blood was running down his chin...