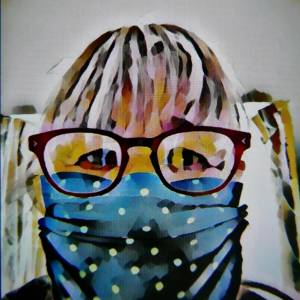 Took a few phone shots of my grandson while I was on a Skype call to my son...six months old nearly already, where did the time go. Am going to be sending some board books out to them as they are virtually impossible to buy in Vietnam.
Earlier I was on our weekly Zoom call with the Somerset photography group, there was a lot of talk about cake and ice cream making. I wonder what that says about us....
Peter Pan was a great disappointment last night   the most dreadful production ever....awkward,  stilted acting, and Christopher Walken as Hook looked as though he was hating every second and could not bring himself to make eye contact with anyone....truly awful.
Felt like a quiet afternoon, pottering, pruning and weeding in the garden....a great new series on BBC tonight, The Luminaries ...looking forward to that.

Thanks so much as always for looking in:)