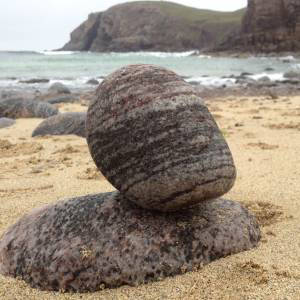 A chilled out day. I’ve managed to switch off much quicker than normal - which is welcomed.

I sat here for a while with the lassies watching the wildlife. Saw an osprey and one of the golden eagles (turns out there are four behind the cottage) flew over my head from a rear approach checking me out!! It was magical. I was standing up reading something at the time. Jura was by my side and the two of us just looked up after me thinking “What was that?!” The woosh of her wings was powerful. In that moment I felt blessed and them ran inside to tell Norman.

A magic start to my Monday for sure.

We then headed to Wick to get food for the lassies, and then down to Keiss beach. An interesting place with war time sea defences in place and a tow line for subsea7 platform installations. As a west coast lassie...it’s still odd for me to look out and not see islands.

Hope you all had a good day. Starting to catch up on blip journal and comments, albeit still slowly :-)