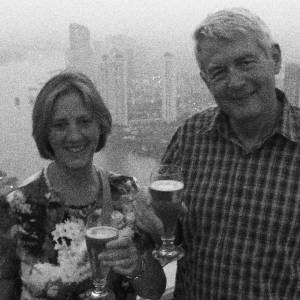 We cycled around the Ieperboog or Ypres Salient front lines today. There are many beautifully kept Commonwealth War Grave cemeteries dotted among the farmland, peaceful on a sunny breezy day surrounded by fields of corn, potatoes and wheat.
At the first one we stopped at , Colne Valley Cemetery, I  read every name, because it seemed disrespectful to not look at all of the names. After a while it became clear that it would be impossible to keep doing that because there are just so many.
One of the biggest we saw today was Sanctuary Wood Cemetery , in the photo , but there are many more much larger than this.
So many boys and men died, so young. The War to end all Wars it was said. Sadly that doesn’t seem to have been the case. There are still powerful rich men ( mostly) , obsessed with gaining more power and more territory. I don’t know how that will ever end.
The extra shows a pile of rusting equipment and ammunition near Hill 62 , where you can walk around the trenches. It seems that nature is reclaiming it slowly but surely.