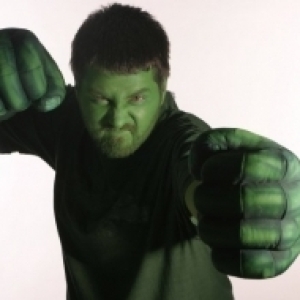 I was struggling at work this morning after a few pints last night when I was thankfully saved by a text message saying 'we need extras, get here asap.' So I did.

I started off being 'head behind monitor 2' before becoming 'front row right back of head.' I was then asked to come back for some voice over work which I was intially unsure about as I was supposed to going to a mates to discuss some of filming of our own next weekend but I thought 'how long would a bit of speaking into a mic take...?'

Actually all afternoon in the end cos everything else was filmed before we got to the VO stuff! So I ended up missing the filming meeting at my pals but it was cool, a great day of filming and in the end I got to do a fairly important bit of voice over AND got a wee bit of input into the whole film here and there :D

Made some cool contacts too, all good things to add to the CV! The film will be getting submitted to Bafta as well so fingers crossed!

Also in other news, I can be seen in this video here: http://www.youtube.com/watch?v=xMkm80GWDKM Go to 1.07, I'm on the left in a black jacket and hat pointing away from everyone as I was holdiing a camera! I'm FAIRLY certain that the guy playing the yellow tamberine at 3.08 was shot by me and I quite recognise one or two other brief shots that looked like things I was doing - don't know if we'll ever know though but if you pause the big list of names at the end, you WILL find 'Pete Harper' in there(it's in alphabetical order, take a look).