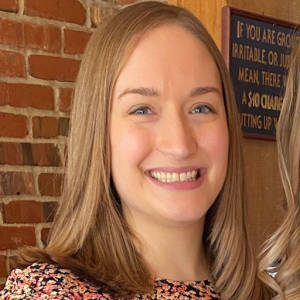 Wow, what a great day! Caitlin and I traveled to the Barnes and Noble in Union Square (New York City) to hear Bret Easton Ellis read from and discuss his new novel - a follow-up to Less Than Zero- Imperial Bedrooms. We got there VERY early and were astounded to see other people sitting in chairs waiting already, so we purchased copies of the books, grabbed drinks from the cafe, and started to read. And read. And finish the book with an hour before the reading to spare! We were very lucky to sit in the third row of seats (the first row, if you're not counting the first two rows reserved for Bret's "LA People"), so we had a great view.
A few minutes after 7, we were introduced to Andrew McCarthy! The "Brat Pack" actor starred in the movie version of Ellis' first novel (Less Than Zero) and also read for the audiobook version of Imperial Bedrooms. He introduced Ellis, who read from his newest book (he doesn't read too well - but he's a writer, he can't do everything :P) for five minutes, and then Andrew conducted a little interview with him before opening up the floor to audience questions. Ellis was really down-to-earth and funny. He had the audience laughing quite a bit, which was great. Long story short, his parting words to the audience were something like, "seriously guys, tequila. Let's leave it at that."
Caitlin and I were some of the first people to get our books signed. Post-It notes with our names were placed in the books prior to going up to meet him, so it would be quicker and easier for him to personalize our books that way. I was so excited and nervous when it was finally my turn, and I mumbled something about being a creative writing major and his work really "striking a chord" (or something to that effect, haha) with me, and he was, understandably kind of dazed (I would be too, having a swarm of fans at my feet) but he was very nice and shook my hand!

HE SHOOK MY HAND!!

I hope some of his creativity rubbed off on me...