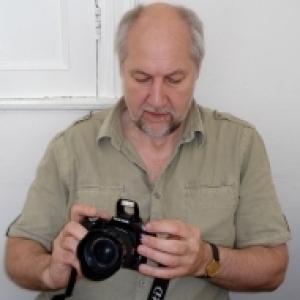 It's not the most technically brilliant but it's the best I can get.

On the day of her funeral, and on my 300th blip, I stand beside a painting that hung in my mother's house, handed down through the Italian side of the family and I now find myself custodian.

I will be reading out the following later today:-

My mother never wanted to be any bother - which I think is why she chose last weekend to go - it wasn't a rugby weekend you see so it meant that I had to endure another Calcutta Cup match yesterday in which Scotland lost to England.

Mum was actually English - one of two children born in Newcastle to Richard and Anita. Her father was from the north of England and was a successful salesman of machinery related to the livestock industry. Her mother was part Italian and from Liverpool.

The family moved to Glasgow via Golders Green in London and she found herself at Hutcheson's Girls School. Being English at a Scottish school was never going to be a smooth passage, but it is a testament to her enduring ability to be sociable that she fitted in well.

Mum had a comfortable and privileged upbringing in Newlands in Glasgow. She tinkered with something called "employment" but in the end, in 1941, she married a former Australian Rugby Internationalist, Geoff Bland who had set up an Insurance Broking business. She was 25 and he was 35.

After Geoff's war service, and following a short period in Eaglesham, the couple moved to Fernleigh Road in Newlands. In 1945, my sister Anita was born and my mother described this and the three years following as a very happy period in her life.

The next 12 years were to prove turbulent - a miscarriage, the birth and death aged 5 of a son Philip, from leukaemia, a serious heart attack for my father culminating at the start of the 60's with the deaths of her own father and her 55 year old husband within 8 months. During this time, I was born and the family moved to Merrylee Road in Newlands.

Following the deaths, Mum's mother then moved in with us. Now a widow, at the age of 45, mum found herself looking after an aging parent and a young child with Anita now studying for university.

The 1960's was when I start to remember things first hand. My grandmother was an excellent bridge player so there were often bridge nights with friends. I'm afraid my mother didn't always take the game as seriously as the others! I remember rug-making activities and she also took up oil painting. Throughout this time, and beyond, she played golf at the Williamwood Golf Club. Keep fit and swimming were also hobbies. She bought a Border Collie, Pandi which became part of the family. In 1969, Anita married James and moved away to Cockermouth in Cumberland. Mum was, I think, rather lonely and eventually, one of the bridge players, Jack Adam became a long term companion. I used to arrive home to find furious arguments going on over Scrabble.

At the start of the 70's, the sadness of mum?s mother dying was offset by the births of Siobhan, Caireen and Oonagh to Anita and James and we made regular visits to Cockermouth, Balerno, Alva, Dundee and Leeds over the years. Mum was always interested in sport - tennis and rugby in particular and often came to watch me play. The house was also a popular visiting stop and temporary haven for many of my friends and mum always made everyone feel very welcome.

The 1980's was when I was married. We built a house on the double feu garden of Merrylee Road and our children, Geoff, Barbara and Philip grew up next door to my mother. Geoff will be telling you a little about that next. My sister's family with daughters Siobhan, Caireen and Oonagh returned to live in Glasgow so mum now had all her family close by. Although mum's grandchildren live slightly further afield now, they all still return. Latterly, great-grandchildren Nuala and Kian visited and will always remember "Gaga"!

Mum gradually became more restricted by old age and so I found myself with small shopping lists. She wrote them as if she was walking round the supermarket so you picked everything up in easy sequence. My sister was given different lists but I found myself regularly picking up Chicken Drumsticks, Packets of Cheddars and a Bottle of Whisky (with the word "Large" in brackets). There were additional requests for kit-kats and cans of coke which were designed as a magnet for me and my son Philip mainly. I would like to thank all of the carers involved in her support at her home. I'm sure they appreciated her interest in their own lives as well.

Last July, she had a small stroke which removed some of her vocabulary and restricted her avid book reading and crossword solving. In October, she had a fall and she lost confidence in her ability to look after herself.

The Mansionhouse unit provided temporary sanctuary before she moved last month to Sherbrooke Lodge Nursing Home in Pollokshields. Mum was settling in well and once again making sure that she learned the names of the staff. Everyone was pleased to be planning visits. My nieces, Caireen and Oonagh are expecting babies this year and were looking forward to showing them to their gran. Sadly it was not to be.

I'm glad to say that nearly everyone in her close family had seen her recently. I would like to thank all of the staff in Mansionhouse and Sherbrooke Lodge for their care and also finally, the staff in particular of Ward 14 of the Victoria Infirmary who were absolutely wonderful.

Mum will be buried at St Conval's cemetery at the same grave as her husband. She outlived him by almost exactly 50 years. In the same row of graves, just a few yards away are the bodies of her father and mother.

I started by saying that mum never wanted to cause any trouble or be a burden. She never was. She made light of the pain that old age brings and at the end she went quickly and peacefully. If you have to go, that is the way to do it.