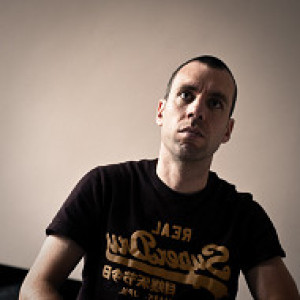 Ok, so sometimes you don't have to look very far for an image.

This morning I thought I was succumbing to the effects of sleep deprivation as, from my office window, I watched a polar bear amble down Lothian Road. It took a turn towards the Clydesdale Bank Plaza building and parked itself in the revolving door.

Obviously I couldn't resist wandering over to investigate and it turns out it was a rather impressive stunt as part of a very civilised protest by Greenpeace. The protest is in response to Cairn Energy's activity in Greenland.

For those of you actually wondering if it is a real polar bear; you'll be happy to know that it was just a very impressive animatronic.