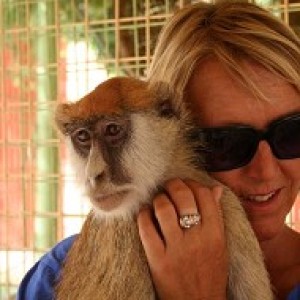 No electricity this morning in the village, no problem, I went out for a cycle, as it is a beautiful warm winters day.

Heading towards the Qorna Mountain, with it's Tombs of the Nobles, workers village of Deir El Medina and the Assassif, I stop off for a cuppa at the Rest House, adjacent to the Mortuary Temple of Rameses II.
Every morning, Father, as I call him or Mahmoud, Hussein, Hassan, Abdul Rassoul if you are after his full title, sits on his table, smoking a cigarette with his black, cigarette holder like the Moudir (Manager) that he is.

This quiet and gentle man, controls the running of this restaurant, without having to say a word. His presence is enough.

Hanging proudly on the walls, are photographs, photocopies of articles that have been published and snaps of Father with friends that have visited over the years. One photograph that just grabs me every time I visit, is the one he is holding in today's Blip.

This is a photo of his father, Sheik Hussein, Hassan, Abdul Rassoul, when he was 100 years old, holding a photograph of himself when he was 12 years old, wearing the necklace found in Tutankhamuns tomb in 1922 by Howard Carter.

The 12 year old boy, made tea then for his father and his good friend Howard Carter. Carter had asked to see the young boys father as he wanted to be shown the Valley of the Kings. He of course obliged and the excavations began, the young Hussein making tea for them all the while.
On November 4th 1922, Hussein found the top of the staircase, to Tut's tomb, 13 feet below the entrance to the tomb of Rameses VI. Such elation! Hussein, his father and Carter went into the tomb and the rest is history.

'Father' is 70 years old, his father in the photo is 100 years old and the young Hussein is 12 years old. He wears with pride, the necklace that Howard Carter gave to him as a boy. A souvenir from the tomb. Hussein later gave the necklace to the Cairo Museum, where it can still be seen today. Doing this, gave good luck to the family, which still continues today!

I hope the tradition of taking a photo, holding the photo continues through the future generations, as his son Mohamed is now 35 years old.

As for the Rest...Father carries on the tradition of making tea, as his father did, but these days, a cold Stella can be served as well!