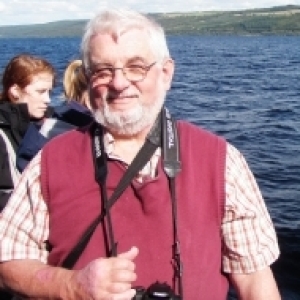 This is something I would have missed except that a lady at Mrs P's work also distributes the P&J (Press & Journal) and sometimes has a few over as freebies. Mrs P brought one home last night and it had a brief mention of a "happening" in Inverness's Rose Street multistory. It's a group called Inverness Old Town Art (IOTA) which was responsible for the artwork on the walls of the road leading up to Crown opposite M&S. Last Friday they were spray-painting cars at Rose Street. Next Friday, the last Freaky Friday of 2011, they are doing something at Rose Street where you will be taken up to Paradise in the lifts. Today they were showing a film and also had this moss-covered VW, work of Rosie Newman. Perhaps not my best shot of the car but I chose it because of the man with the degging can who obviously thought the moss needed watering. This is the sort of thing that wins the Turner Prize. Spent some time chatting to a very nice young woman who was interested how I had heard of it.
And up Academy Street I passed another "artwork". The whole front of the Victorian Market is under scaffolding and some sort of cloth sheeting. But on the wrapping sheets there is a "painting" of what the building looks like underneath. Quite a strange effect - I had to look twice because at first I thought I was seeing the building itself through transparent gauze or something. I took a shot and next time I'm in town may do a blip.

[Edited later to say the [url=http://www.flickr.com/photos/theposs/6481979445/in/photostream]Victorian Market[/url] is here. Right click on image to see larger]