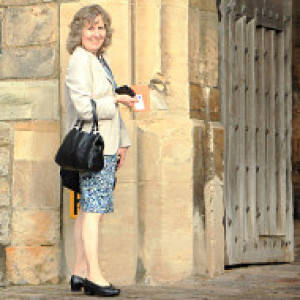 The Genome Stripes (developed by Katy Hallett) are a 70 metre stretch of colour stripes representing the code for the gene BRCA2 laid in exact order along the route. They highlight the pioneering work of Sir John Sulston in decoding the human genome. The 420 coloured stripes represent the first part of the 10,257 genetic letters, or bases, of BRCA2, which is just one of about 25,000 genes in the human body. There are four bases, each represented by a different colour.
In its usual form, BRCA2 produces a protein to repair human DNA. However, some of its variant (mutant) forms can lead to breast cancer.
At this scale, the whole genome would need a path going around the world 15 times.

I'm posting this today in support of a friend that I did my PGCE with. "Short Cut Chelle" was diagnosed with breast cancer for the second time about a year ago - she has undergone drastic surgery and some pretty debilitating treatment, but thankfully she seems to have beaten it again.