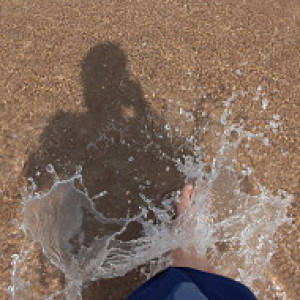 The sea is feminine. Well it would be, wouldn't it? :o)

I had a stabbing pain in my head all night last night. With every heartbeat a whoosh of pain jabbed at the left side of my head. I got up this morning and tried to get on with stuff but I felt like I was half asleep. I tried to play the flute but my fingers felt like sausages and when I looked in the mirror I noticed my eyes were puffy as if my brow bone was too heavy for my top lids.
Caffeine didn't work. Food didn't work and all I wanted to do was lie down and go to sleep.

Then I remembered that the last time I had felt like this was the last time I felt completely stressed. I had been sat at the desk all day concentrating or worrying and I've been doing that again recently.

Some people thrive on stress, others just manage to muddle through. Some people find ways of dealing with it. I just get ill. I think it's a combination of genes, learned responses (my parents were always stressed when I lived at home) and some of my own fabulously awful internal chemical/hormone combinations. I also learned to worry at a very young age about things because of a few rubbishy happenings.
I'm one of those people who just has to say, 'Stop. Can't go on.'

So although puffy-eyed, sausage-fingered, tired and dizzy, some tiny, vaguely sensible voice inside me told me to get to the beach with my camera. Not forgetting my legs.
So I went. I breathed, I walked, I photographed, I closed my eyes, I slowed down and I tried to clear my head. And I did a bit. For a while.
I'm still tired and I feel like a bit of a failure today but physically I feel a heap-lot better

I found that the song La Mer started playing in my head as I walked along the shore.
I've just listened to it again on iTunes to help me choose a photo. I had to stop it though because every time I hear anyone singing in French I think of my dad and I can't stop crying.

I took loads of photos and this isn't the best quality because it's double-zoomed (if that's not a photographic term it should be) but I liked the splooshy, splashy, funky look of it as if the sea was playing (Can you tell I'm married to a surfer?... Whaddaya mean, 'No'? ;o) ) Oh and it was very very misty
Am I making excuses? You bet I am!

In other news: I've had an email today to say I've got another story on the Ether Books iPhone app. It's in the humour category. :o)

Ten minutes later...
I just had to add this: "Trenet wrote the lyrics of "La Mer" on a train in 1943 while travelling along the French Mediterranean coast, returning from Paris to Narbonne. He supposedly wrote the song in ten minutes, on toilet paper supplied by SNCF"