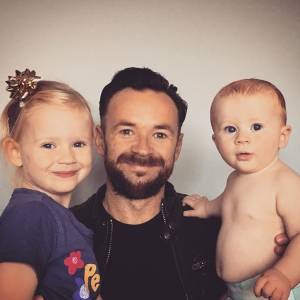 Meet my Mum. Its Mother's Day after all. I dropped some flowers over for her and a card, she returned later with a large cumberland pie and some cheesecake, fair swap!

Had a morning music rehearsal for tomorrow's Fire.Cloud gig in St Margaret's RC Church in Clydebank, its sure to be a great prayerful evening.

Joni had spent the morning in the garden whilst Amélie slept in her pram, giving her enough time to do a very impressive job of clearing the ruin that the winter had brought, there is loads of promising signs: Tulips, Daffodils, some wild grasses and plenty more. . . here is the beginnings when we moved in. .

After a short lunch, we went to Mass in Dumbarton on route to Lodge on the Loch for a Mother's Day coffee and cake for Joni, a brand new Mother.

It was a great day, feeling tired now though.