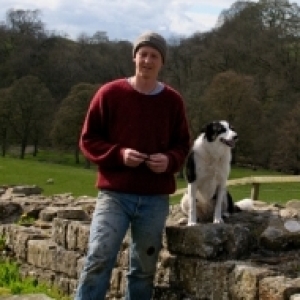 Today we have had a famous Mexican soap actor (Luis Ernesto Franco) and his team filming some snippets of British life that will be aired between events during the Olympics. They filmed Scott in the forge, some lambs on the farm and then they attached this camera to our dog to get a collie's-eye view of running around after sheep. She was a bit unsure at first but seemed to grow into the role, and even looks quite proud to be representing GB in this shot.