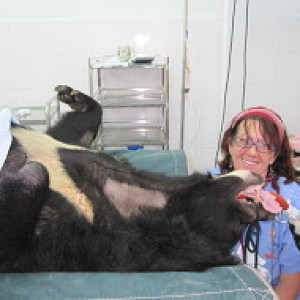 the edges of my life

not the best bear shot I got today but the most enjoyable for me - went up to work still feeling a bit wobbly but had to finish up some jobs as a week off next week.... work done and off to watch bears..... finally got a nice shot of a sunbear sitting up like a meerkat - but then the bears in House 2 were just being so adorable.... these two in the front of the photo were having a friendly bear wrestle when Mama (the little bear in the background on the pile of rocks next to the pool) took offence to Irwin Junior who hopped in like a big goofy teenager and started splashing around.......Mama takes offence to everyone really except her best friend and soul mate Moggy - think I've talked about them before - both little and fierce bears and both missing a front paw.... anyways this little bear stood up there and just yelled and everyone just stopped.... and looked at her..... and then went on with their lives.... Irwin splashed a few more times but then gave up and slunk out of the pool - Mama stood there and just had this look on her face of 'try me' - everyone else went on with playing but made sure to give her some space... this little bear knows how to get respect