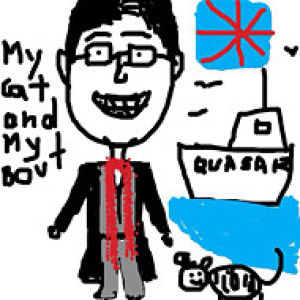 What a crazy city this is...  Alighting from the tram in St Peter's Square my eye was immediately taken by this team of camera people (and actors maybe?), mixed Asian and White.  Of course I had to ask what it was all about and I was told by Sanjay - he's the guy 2nd photo down on RHS - that they are producing a Bollywood film showing the beauty of Manchester!  They were his exact words - the beauty of Manchester, why not?  Anyway today they were getting ready to film a little Bollywod scene on and off the tram at St Peter's Square but as I couldn't wait around to see it, Sanjay gave me his email address and I will send him a link to my Blip.  I did tell him that by tonight my blip will be all around the world...  He says the film will be released in 2016 so I hope he puts me on his mailing list and lets me know when it is to be screened..  I did like the little interlude when the chap on the bike contraption (sort of middle of bottom row) peddled across, advertising a financial organisation!  At the same time, just around the corner they were erecting a pop-up bar as a homage to Aperol - a Venetian drink, much favoured by my son and appears to being promoted over here now..  Then my final shot is the view from our third floor office - seems strange to be "above the tree" - almost like being in a rain forest. Brilliant city - full of life, very vibrant..