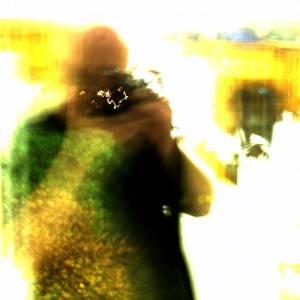 I blame Galileo for dropping those balls from the Tower of Piza, for without him showing rain the way to the ground these periods of precipitation would not be much of a bother. I did not venture far today just popped down to the local chippy to get dinner. I thought it would be a quick 5 minute trip but it turned out to be more like 45 minutes waiting for the fish and chip shop to cook the fish.
While I was waiting, I noticed this guy at the bus stop reading a newspaper, and immediately thought about the saying 'Todays front page is tomorrows fish and chip paper'. I took the snap and as I looked at the screen the car entered the scene. When I viewed the image I realised the lag in the shutter release because the car was now captured leaving the scene.
I had a few funny looks from the propriotors of the shop, it is a good job I am quite a regular as my actions were soon dismissed. Talking about 'regular', my grandfather used to reckon the best place for a newspaper was on a nail in his earth closet.
Although I have spent most of my life in Wales I was actually born in Norfolk and in my early years I used to return there quite frequently to visit relatives. It was quite funny being out 'in the sticks' and my relatives teasing us about living in the wilds of Wales. I used to think it was quite funny as we played cards by the light of an oil lamp and drunk tea made with tinned condensed milk because there was no supplied electricity for a fridge. Then I would just think about life back home in Wales watching TV and pulling a chain to flush the toilet.