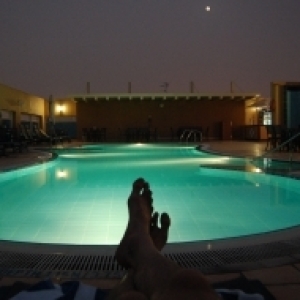 A day in the life

Sat down, 1st hand pocket Aces, doubled up. 2nd hand pocket kings, doubled up again, unbelievable, cruising through the buy in period. Reach that, then had a couple of swings up and down, but got to last eleven with slightly less than average chips, guy raises to put me all in, he'd been at it all night and I was pretty sure he was full of shit, so I called with 7's, he had 6's, held up, made final table with a decent stack

Italian guy tells me he had a premonition that I'm putting him out, he was cool, figured he's be up for a deal later if it worked out that way.
Final table was a real grinder, 2 hours before we had the first casualty.
Young guy puts in a big raise, my expert read on him was that he doesn't really look like he wants any action, so I fire a 20k reraise in putting him all in, he flips over aces to my jack's, whoops!

Eventually got to last 6 which is where the decent prizes started at £120. I'd been playing pretty tight so knew I was going to have to loosen my game up abit as the numbers dwindled but I seemed to get caught each time I made a move so was getting a bit low on chips. I raise with AK, girl calls, I check, she checks, turn comes, I have straight, and flush draws, a semi bluff really so I push all in, she calls, has the str8 made already, 9-Q, river comes up J giving me higher straight. Total suck out, felt a bit embaressed, but, its happened to me too often so happy days! It was the only time in the tourny I got lucky, but totally critical time, so that we me back in, eventually got down to the last 3.
The italian who had the premonition, me and dude no 3. Italian was massive chip leader, says do a deal, he takes + £50 we sort out something beteen me and no 3. No 3 says no. Italian, huge raise, no 3 calls, Italian huge continuation bet, no 3 calls. Italian puts no 3 all in, he calls, flush. Italian loses 50% of chips in one hand. Next hand Italian guy raises, I figure he's steaming, I got pocket 7's, I put him all in, he's got 2's. 7's hold up. Chips counted up he's got 3000 left, just enough for a small blind.
Me and no 3 call and check it down (cruel, I know but you double your chance of putting the player out if both of you just check till the river!). I look at my cards 2-6 spades straight flush. Pretty rare hand, so I win and Italian guy goes out. When I entered the tournament I paid an extra £1 on the entry fee to be on the accumulator thing, which basically pays out all money collected on straight flushes (10% of pot) or royal flushes (80%), £540 collected, so that hand won me a cool £54!
Unbelievable, the poker gods were good to me.
Anyway, no 3 and me had about 100k in chips each so rather than carry on (it was 4.30am) we split pot 50/50, job done. A cool 400 sheets. Unbelievable. Happy days.