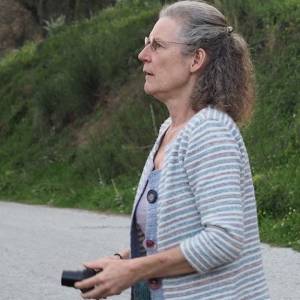 Today was the day I had planned to revisit the spring at the top of St Barbara Street in the village. The Temperamental Little Camera is now in a massive sulk so these days I take the smartphone along, together with permission. As I have previously explained, street names in the village are something of a contentious issue and there is a great likelihood that the spring has a long history whereas the road name does not. As luck would have it, my friend Nikos was nearby and so I was able to ask him the name of the spring. He told me it was called 'Rios' (I'm not sure of the spelling here, we'll take this as phonetic) I asked him what it meant and he told me it was the name of a nymph, and to make absolutely sure that I understood, he cited Tinkerbell. Seemingly nymphs and fairies are interchangeable in modern Greek mythology/language.

When I got home I searched for 'Nymph/fairy named Rios' and the nearest I got was this. A human male anime character. Not quite Greek holy well enough for my liking.

I began to suspect that Nikos had been pulling my leg. So for the first time ever I went for corroborating evidence and phoned a friend, this time, Anastasia, who wouldn't dream of pulling my leg.
"I think that spring is called 'Rios'"she said, which was good enough for me.

This tells me that in Greek mythology a nymph is a minor female nature deity, so I think I have found us a real water-nymph, and the closest thing yet to a water-source actually named for a character who might once have been worshipped.

Separately, and for those who may be interested, 'nymph' also means 'bride', though for clarification when referring to a bride in modern Greek the 'm' becomes silent and is pronounced 'nifi'. A nymphomaniac therefore, is a woman who enjoys being a bride, and nothing more.