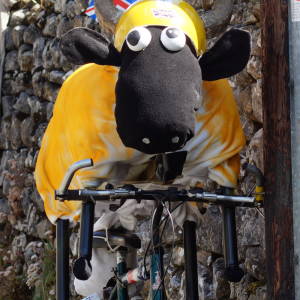 What possessed me to walk to Stoodley Pike on the edge of storm Katie? We may not have borne the brunt of Katie's wrath but on the fells above Hebden Bridge & Todmroden, she still had a sting in the tail?

A friend has just returned from Australia and wants to do some fell walking - Stoodley Pike was my idea - didn't put him off!

Ascent from Mytholmroyd via Daisy Bank and back via Hebden Bridge for the duck race.

Ferocious winds and chilled to the bone but on the bright side, we weren't the only fools on the moors as the photograph show. Some brave (& foolish) souls ventured up onto the balcony. Seen here on the lee side.

Had a debate as to what the pike commemorates but didn't hang around long enough to read the inscription.

Wikipedia quote it as:
"STOODLEY PIKE
A BEACON MONUMENT
ERECTED BY PUBLIC SUBSCRIPTION
COMMENCED IN 1814 TO COMMEMORATE
THE SURRENDER OF PARIS TO THE ALLIES
AND FINISHED AFTER THE BATTLE OF
WATERLOO WHEN PEACE WAS ESTABLISHED IN 1815.
......."