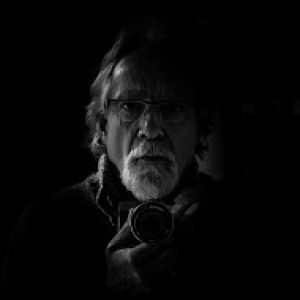 Head above the clouds

﻿The forecast for today was not good so I started my trek early to catch the best of the morning's weather. As I left Invermoriston the mist was swirling around the tree tops and the distant hills down to Loch Ness but after a steep climb through dark, silent, misty stands of pine I emerged above the tree-line, and above the mist too. The air was wonderfully clear and crisp and I could see for miles.
Passing through old clear-felled forestry, the straight rows of silvery grey tree stumps stood like grave markers in a tree cemetery with small unidentified birds darting amongst them. The trail undulated steeply through different areas of plantation and mixed forest with views down the loch from the high points. I stood to watch a shower move down the loch and then followed it once it had passed, leaving glistening leaves and the scent of pine resin in its wake.
Steep ascents and descents followed each other in succession winding through forested and wooded areas, always with the Loch far below appearing and disappearing down steep wooded slopes with burns cascading down.
Then suddenly out of the trees into open meadow, heat rising from the grasses, a shock after the cool of the forest. Parked cars and a road - and a pottery serving tea and cake! Epic pineapple and whiskey fruit cake it was too! I sat and chatted to two Swedish girls about Nordic Noir and their penchant for British humour - there is a great camaraderie between fellow walkers.
When I came out the skies had opened and it was teaming. Full waterproofs soon became hot and sweaty as I trudged along 'General Wade’s Military Road’ presumably built to control wayward Scots. An earlier example of foolhardy English optimism?
Drumnadrochit came into view but, just as yesterday, the path veered away and meandered on for another two kilometres before the final (always the longest) kilometre along the busy road into the village.

After a quick meal I am now crashed out in my comfy B&B - and the pretty room even comes with a resident teddy bear! Today was 22km (13.75 miles). I have a rest day tomorrow and on Friday I have to decide if I will take on the whole of the 29km (18.25 miles) last section of the Great Glen Way into Inverness or maybe cut it short and head for a bus at the last road crossing.


I wanted to travel as light as possible today and knew it would be wet so didn't take my sketching stuff, hence no drawing. I hope to make up for that tomorrow