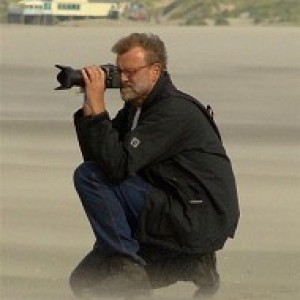 The nightshift had to empty the coolingwaterduct of unit EC3.
One of the debrisfilters did not rotate anymore.
This happened before at another unit.
Some part was missing, a kind of cap which is normally located on the frontside of the filter.
When coolingwater flushes through, the cap gets stuck between the rotating part and the casing, thus preventing the filter to rotate.
But: when we pump out the water, the cap goes with it, in the worst case up to the pumping station, about 1000 meters away.
As there was still water in the duct, we started pumping again.
Here Peter is watching the water is whithdrawing...
In the meantime a sealwaterpipe which was broken could be replaced.

Later on he might have to wear waders.....
It's impossible to wear a helmet inside the duct, and as it was very damp the long sleeved shirt had been pulled out.
As you can see one can walk inside.
Normally 7.5 cubic meters of water per second is rushing through!

Think about what will happen when someone has failed to take the right safetyprecautions and we are in the channel while someone accidentally opens the two huge shutvalves in the interconnectionline....

In the almost Blip you can see the entrance of the duct with Rob climbing in.