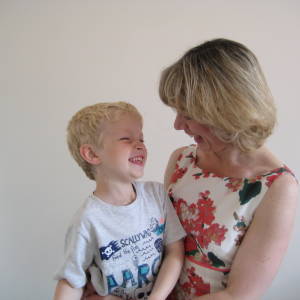 And a new wet suit.
Last day of the holiday, and with a forecast of warm sunshine, we headed off for our favourite beach. Harry had a new wet suit and junior surf board, so we were hoping - (really hoping) - for some surf. There were some waves, not huge, but the wetsuit made all the difference..and Harry was happy to play around, trying to catch a wave....or just paddle along the shoreline.
Later in the afternoon, the surf was non-existent, but Harry was rather envious of the older kids/young adults who were strong enough to swim some way off shore and jump off the rocks into the sea; see extra. [Maybe, next year...]