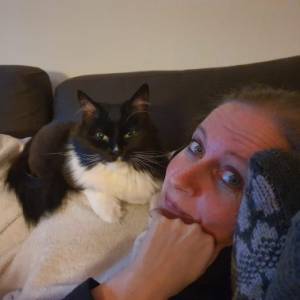 Out of the woods

Isn´t he a handsome chap?
His name is Yoshi and yesterday evening (already on my way to bed) I heard meowing in the hall and Lars with a "Honey, look what I found". The poor creature was calling out and rather thin, so we gave him some water and some food which he ate in seconds. He walked around and called out a bit more but was also rather cuddly and stroked around our feet a lot.
We let him stay the night to see what happened, and in the morning he went out while Lars went to work. I was supposed to work late, so I saw the little guy later this morning and went for some cat food. Back from the shop, he went straight into the house again, and I gave him another meal which he liked. I also went online to several websites for lost pets and after a while, there he was, big green eyes, red fur, same pattern on the chest. Gone since July, missed by his family, especially the three kids. I called the owner and there was much rejoicing. Turned out, the family lived in our house before us, and that is why Yoshi probably insisted that we should rescue him.
Such a happy ending, and a good way to endure my work shift.
Signed my contract for my new job and now only 4 more weeks to endure