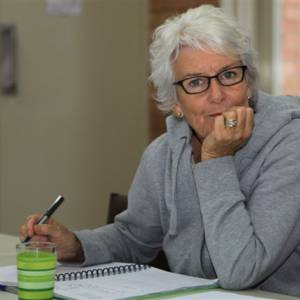 Today our Bird Watching Group from U3A visited Kinnairds Wetlands at Numurkah, about 20 minutes north of Shepparton. It consists of 100  hectares of natural and constructed wetland which is home to abundant bird life.  I saw more Sacred Kingfishers than I have ever seen, but failed to capture one good shot. So I moved on to something a little more forgiving.  I had intended to just get a WidWed shot, but this family of Black Swans won me over. What I love about Black Swans is that they are monogamous breeders and share incubation duties and cygnet rearing between the sexes, demonstrated here with this outing of the whole family.  My extras are of the wetlands covered in duckweed (Lemna minor) which forms a dense green mat on the surface of slow-moving or stationary water.  They are tiny  free floating plants that are native to Australia. They include the smallest flowering plants on Earth. They have tiny, white, barely visible flowers spread mainly by fragments. It can double its mass every 24-48 hours, hence the carpet of green you see in the extras.