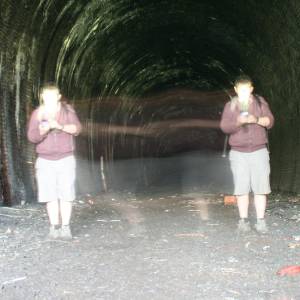 Made in 1973 for Nurminen Oy of Finland - it is a hydraulic drive unit (one of two) which moved heavy transformers in Finland. Made by Scheuerle of Germany.

It has three V10 Deutz engines and weighs 50T. (thats just the unit - it would have pulled 200T + In conjunction with the other unit) They're owned by a friend of mine who sells heavy equipment and will be scrapped if a buyer can't be found soon.

A museum in Germany was keen but only if they were donated free.

I got to drive it - then went into a cold sweat when he said reverse it back into the yard. I managed it without flattening anything. I'm still grinning... Not everyday you get to drive something like this-seeing as only the two were made as far as he knows.