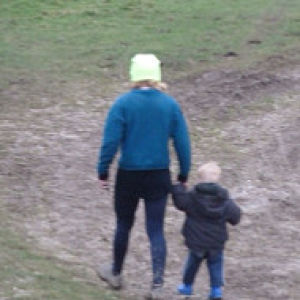 World Record in the making

This is Mary Keitany on her way to breaking the marathon world record for a women's only race in London today. (Paula Radcliffe has a faster marathon time, but was paced by men!)

GravyC and I left the car at Elephant and Castle and jogged to our usual spot on the marathon course. We first looked for blipper Yeeeeed, but couldn't spot her unfortunately. The wheelchair athletes came past as we arrived, closely followed by the ambulant para athletes. Keitany, who had taken the lead after just one mile, appeared with her pacer shortly after. It was a good while before the anyone else came into view. She appeared to have even more of a lead when we saw her again at 21 miles.

The elite men were just as impressive, but the really inspiring runners were the ones who followed in the masses. Club runners aiming for personal bests, charity runners raising money for good causes and raising awareness of need, people running for personal reasons or in memory of a loved one.........so many stories. It is always an emotional day. My sister in law ran to raise money for St Christopher's Hospice, whose nurses supported the family in providing palliative care at home for GravyC's lovely, gentle Dad just about this time last year. They were wonderful