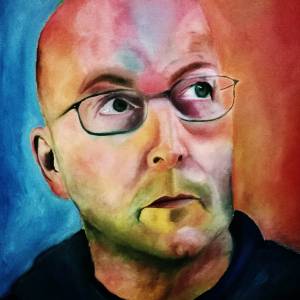 In 1952 a group of architects had a vision of the future where living in social housing would be a place to enjoy light and space. For a society in the aftermath of war hope and optimism were important and the design would reflect not only the needs of individual space but also that of a community: a swimming pool, a place for people to meet and gardens. Space would be a key element of the design, how the individual blocks were positioned in relationship to each other and what, if anything was between them.

The architects had to submit their ideas to a competition and the winner would be commissioned to design the estate. Three of them: Peter Chamberlin, Geoffry Powell and Christoph Bon struck a deal. They calculated that if they entered separately they would maximise their chances of winning but they agreed that if one of them won they would set up practice together.


These three "musketeers" were considered outsiders whose work was full of undisciplined expressiveness. But according to Greg Penoyre who worked for them, they were well versed in the great courtyards of the world, painters like Vermeer and had an good understanding of Indian gardens and Renaissance architecture.

Powell was announced the winner of the competition, they duly formed their practice and began a scheme that consisted of low blocks and tower of one-bedroom flats. This would a formal design relying on the geometric relationships of the buildings with one another. It would be influenced by Corbusier's Unite d'Habitation housing project in Marseilles, be distinctive by its attention to details and would become a symbol of post-war recovery. The Golden Lane estate in the City of London took ten years to complete.

The tower block was the first residential building of its kind in London that was over 50m in height. I took this photograph from a window half way up. I think it still offers a vision of what those architects imagined the future could look like in post-war Britain. The sun is climbing in the sky and it is the block that casts its shadow across the lower levels of the estate. People heading for work criss-cross the large space between the buildings. Even here in the heart of a metropolis on a busy morning there is an unexpected tranquility.

Living in high rise you become aware of life in a different way.
You are removed from the street and are close to your neighbours who are above and below you. You can hear them coming and going and without trying, you become aware of the rhythms of their lives and where yours overlaps with theirs. And looking out of the window your perspective changes. You can observe the pedestrians below for much longer as they make their way across your field of view. There is time enough to see their individuality portrayed by the way that they move.

In the evening you can see the lights come on in the flats of the nearby towers of the Barbican estate. It was created by those  same three architects. They were spurred on by their earlier success to produce a more radical version of the future. It's called Brutalist architecture, but as I look at their raw concrete facade they appear to me to be from a long lost civilisation.


As night descends on the Golden Lane Estate chess players arrive at the community centre and the smell of cooking drifts from the ground floor flats across the open spaces. As I walk by one of the front doors I see the key has been left in the lock. I knock and the door opens to reveal a woman who views me with a mixture of anxiety and suspicion. After all it is dark and more than likely nobody calls at this time of the evening. The expression on her face changes when I tell her the reason I have disturbed her. I bid her a good evening and continue my walk.