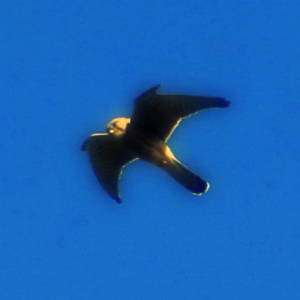 Bird on a Chimney

The sun rose as normal this morning (albeit rather yellow in colour and without any spectacular results) but then a strange thing happened ... Instead of the sun turning into its regular blinding white, it went back into being a yellowy orange colour ... and remained like that for several hours ... :o/
Apparently it was due to a combination of the wind from Hurricane Ophelia churning up sand from the Sahara and debris from the wild fires in Portugal ... Particles were lifted into the atmosphere and carried north towards the Channel Island and the UK ... In doing so, it all produced this rather unusual and interesting effect ... :o)
---
The bird is a Starling, by the way ... :o)