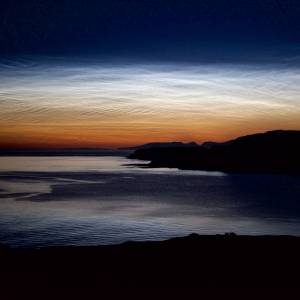 On with the rust

Another beautiful day. Not brilliantly sunny but cold and bright.

The Cor-Ten roofing for East Cottage arrived on Friday so today the builders appeared to start replacing the old onduline.  Cor-Ten is special steel - looks just like stainless steel.  But in a matter of weeks it will turn from a silvery metallic colour to a rusty one.  In weathering to rust, it seals itself so no further deterioration will occur, for the next 120 or so years.  So they say!

Unfortunately the suppliers had not supplied the special fixings required, so a good part of S's day was wasted chasing after alternative fixings which we will have to replace when the suppliers send the correct ones.

The Eilean Ban works out of Croig and was tying up on her mooring when I got there late this afternoon.  On and off during the day they had been watching 2 bull Orcas between Caliach Point and Coll.

Later on I had a message telling me they were heading our way.  I went down to Haunn to look for them.  The sea was flat flat calm, mercurial silver, under a heavy clouded sunset.  Beautiful.  But no sign of them.