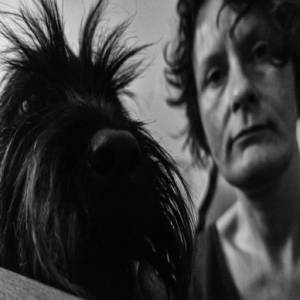 
Anja Bakker and Sean the Harp who live and work in Clonakilty, Ireland are together known as The Flauting Harper
In 2010 they walked from Clonakilty over Dublin, Rosslare, Roscoff, Vannes, Nantes, Bordeaux, St-Jean-Pied-de-Port, and the Camino Francese to Santiago de Compostela. The distance was an approximate 2.500 km and it took them 3 months and 3 weeks. A life changing experience.

On the 24th of March 2018 they will start their second pilgrimage this time from Clonakilty to Rome. They’re making the same commitment and will travel over some 3.200km through 5 countries (Ireland, UK [Wales and England], France, Switzerland and Italy) while crossing a higher mountain range (The Alps versus the Pyrenees) over ancient tracks, Roman Via’s and local pilgrim paths. They expect to be on the road for 5 months.

Anja will carry ‘Sean the Harp’ (who weighs 10kg) as well as a spare change of clothes, extra socks, a hammock, sleeping bag, rain-gear as well as water, paperwork, toiletries and electronic equipment for recording the trip. The pack may not weigh more than 20kg for that’s the upper limit of her strength.

On the Irish, Welsh and English legs they are organising as much as they can, for Anja with her fear of getting too wet and too cold, is praying that this Easter it’s going to be the best weather in 50 years. They’re aiming to play for those on their path at least once a day in whatever settings they can organise or present itself. In France they will have to ease up on the organising for the some of the stretches the walking is hard. There’s a good bit of tarmac and big road walking in the North of France. In Switzerland and Italy they expect to become part of a more pilgrim kind of travel: less structured, often with other pilgrims along the path. The meetings and playing of music will then be more impromptu and spontaneous in nature and will often lead to being offered food and or a bed (playing for their supper).

The trip is a historical in more than one sense. It follows 3 pilgrimage paths (Cistercian Way in Wales, The Pilgrim’s Way in England and the Via Francigena after that). Many feet, and many souls have gone before them.  Even young men with harps on their backs crossed the Alps in the Middle Ages but there is no record of a female bardic harper crossing the Alps. She may therefore become the first female to achieve this feat.


If you’d like to help, be part of it or are just interested in following the trip
http://www.theflautingharper.com
should be up and running the time they leave, and hopefully sooner.

Thank you very much for taking the time to read this,
With the kindest regards,

Anja Bakker and Sean the Harp