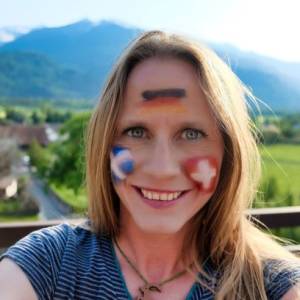 The weather was not as good as it was yesterday, but good enough for some lovely long walks anyway.

I got annoyed by some crows making some ruckus sitting on our chimney pipes - or so I thought - all day long with a lot of hopping around and scratching noises. I love crows, but it was just a bit too much noise after a while.
So Philipp comes home and I complain, he turns the lever that opens the chimney, and suddenly we have those two jackdaws flying panicking around in our flat, confused Djeili in the middle of them!
Turned out that the sounds I heard was one of them falling into the chimney, the other apparently following to rescue the mate, and then they tried to get out there for hours, not at all them jumping around on top of the chimney all the time. Feeling so terribly guilty! Glad that we could steer them out quickly.