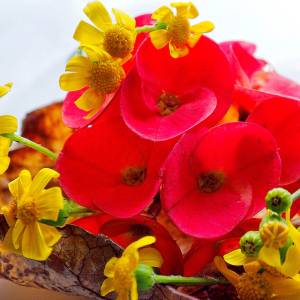 I managed to have a sleep in this morning which set me up well for the day out with J. We did all sorts of shopping - some new tshirts and socks and some fishing gear as the salmon are arriving soon and he's keen to catch one!

Later we had afternoon tea with G and then I went to J's for dinner. All in all a very enjoyable day. Unfortunately I didn't take any shots at all. I asked J to try and take a shot to show the sky as we were driving along the freeway and I've put the result in as an extra as it shows that the outer limits of TC Marcus have reached us and the clouds are thick and the wind is picking up a bit and just a few drops of rain here and there.

Have a look at this site that shows an interesting view of the atmospherics. You'll see Tropical Cyclone Marcus off the coast of Western Australia and another one forming further out in the Indian Ocean. Then over in Far North Queensland there is another big one, it's certainly the season for them eek!! Zoom in to get a greater effect.
https://earth.nullschool.net/#current/wind/surface/level/orthographic=-256.25,-24.76,1177/loc=114.059,-32.673

The big smile is just a cardboard box in the storeroom at work which I noticed the other day. When I got home late tonight and realised there was no blip I had a play with this silly grin lol, desperate measures!!