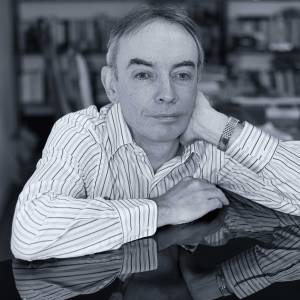 MonoMonday - Every picture tells a story

During the 1950s my father lived and worked for a year or two in America. Towards the end of his time there he went on a cross country road trip (Detroit to California) with his brother and a few friends. He bought "The Sheriff" and "The Deputy" at the Grand Canyon in Arizona and brought them back to Belfast, where he helped run the family shop - buying and selling stuff. Many years later my father told us the story of the figurines and how he used to display them in the shop front window as curios to attract attention. Over the years he had refused many offers to sell them, preferring to keep them as reminders of his trip out west. When I was growing up the shop was long gone. For a year or two in the early 1970s, until it became too dangerous (but that is another story), I would often catch the bus after school from outside where the shop had once stood. "The Sheriff" and "The Deputy" now resided at the back of a cupboard in our lounge, tolerated by my mother who preferred displays of china and glassware over these folksy pieces. After my father died, my mother reluctantly held onto them and when she died I was happy to inherit them. When my uncle (my father’s brother) died (coincidentally in Arizona – yet another story) my cousin uncovered several old photographs from his possessions. One was of the family shop with our grandfather standing outside. That was interesting in itself as I had never seen my grandfather before and only knew him from stories. He and his wife had emigrated with their two sons to Brisbane (where my son https://www.blipfoto.com/Sevan now lives) in the late 1940s, didn’t like it and returned after a year. When I looked more closely at the photograph I noticed two figurines on a shelf in the window. They were none other than "The Sheriff" and "The Deputy".

Thanks to https://www.blipfoto.com/chantler63 for hosting the challenge