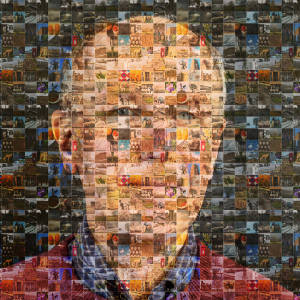 Continuing from yesterday's Wordsworth theme, today we visited Rydal Mount, where Wordsworth lived from 1813 till his death in 1850.  The house has an elevated position overlooking Rydal Water, Ambleside, and the fells of Loughrigg and Silver Howe, and is surrounded by extensive gardens and terraces, kept in a not-too-tidy state, as was Wordsworth's preference.

Wordsworth rented the property throughout his time there, but it is now owned by his descendants, having been bought by his great great graddaughter in 1969, and has been open to the public since 1970.

Wordsworth did, however, buy a field adjacent to the house, and named it Dora's Field, after his daughter.  He had originally intended to build a house there for Dora, but the plan never came to fruition.  After her early death in 1847, aged 43, Wordsworth, then aged 77 and in poor health, personally planted hundreds of daffodil bulbs in Dora's Field in her memory.  The flowers have increased until today, some 170 years later, there are tens of thousands of daffodils blooming there every year, as shown in the extra.  The field is now in the ownership of the National Trust, and is accessed through Rydal churchyard.