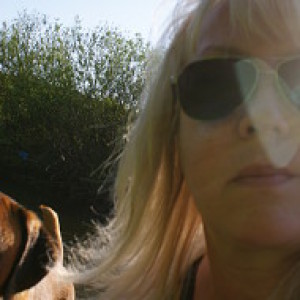 We went to town for lunch, to a favourite little place run by a lovely Turkish couple.  I had a meditteranen melt.  A sandwich not a breakdown.

Then I toddled off for an appointment at a salon in the cathedral quarter.  It has a private room where you can try on wigs.  The salon is run by a lovely girl, Rosin, who has been trained by Trevor Sorbie under his My New Hair initiative.  Most wigs are too thick around the hairline and sides and that's what makes them look 'wiggy'.  When you've found one you like, Rosin will cut it to suit you.  I found a good one, pretty much the colour of my own hair right now so that's the one I'll go for, I think.

In the evening, I went back to the hospital to meet my consultant with the results of my surgery.   He told me that they had found a further lump but happily they got the lot and that's me done now.  That was the first piece of good news he's ever given me.   He also told me that, apart from having to patch up the Ibizan cut, he also redid the scar and tidied up the first surgery from way back in March.  He expressed his disapproval of the quality of the first surgeon's handiwork.

He then told me that I'd be handed over to the oncologist.  I asked if I'd get an appointment through the post but he said no, I'd see him immediately down the corridor.

The oncologist is a really jolly, charming chap, very positive.  He explained the treatment I'll be on FEC-T (Fec-iT as it shall be known hereafter).  I'll have 8 cycles, 3 weeks apart; 4 X the FEC cocktail followed by 4 lots of the T drug.  24 weeks, with no delays that should take me to mid November.   He explained what kind of cancer I have (oestregen receptive ''good news",  grade 1 "good news", something else I can't remember "good news").  He told me, although I'm taking it with a pinch of salt, that on a scale of 1 to 10 I should never feel worse than a 4.  If I'm lucky it will be 3.5, if I'm unlucky it should not be worse than 4.5.  I'll take that.  A hangover is usually at least 7 these days!