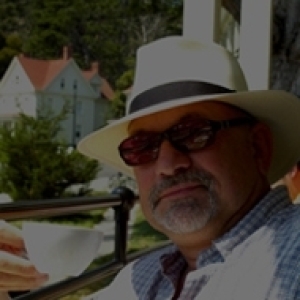 Today we got a call from a gentleman that thought he had several "eagle chicks" in a tree near his back yard. He called Audubon to find out if anyone could come and identify them and offer a photo opportunity. So, after work I decided to battle commute traffic and go to his place in the farthest part of south San Jose to see what he had discovered.

The siting off his rear balcony was quite difficult, but I could see activity between a large adult and several close to fledging chicks. I finally saw the birds well enough through the tree limbs and branches to identify them as Red-Shoulder Hawks. The man told me he was pretty sure he and his wife had seen as many as 5 chicks in the nest. I was able to count at least 3 chicks and one adult, but the nest was well hidden and showed a lot of activity.

In this photo you can see 2 heads belonging to the fledges just after the adult had gone on another search for more food. Not the best photo, but certainly one of the most productive nests of this type of hawk I have ever seen. While there I saw the adult come back to feed the chicks and counted at least 3 young birds.

Hoping they will all make it and be able to find food and fly on their own. The chicks were about 3 weeks old and certainly getting ready to fly.