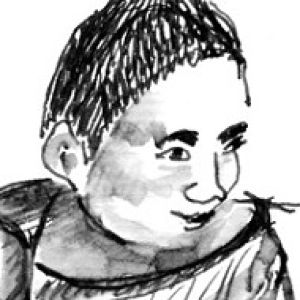 Sometimes it's hard to be Catholic.*

This weekend, instead of an edifying homily, all priests had to read a
letter from the Archbishop telling us how to vote.

I knew this was coming. I thought of skipping mass, but I couldn't. So I just sat and wrote in my journal and did my best not to listen to the harangue.

In voting Yes on 106 as the Archbishop insists, we would be depriving non-Catholic women, Catholic women who are pro-choice, and poor women in general the help of monetary assistance from the State of Oregon when they seek, for reasons best known to them, the termination of a pregnancy. (Remember, as you think about this, that many requests for termination are the result of a failure of contraception or failure to use contraception — and the Catholic Church deems contraception a grave sin.)

If you believe that the Catholic Church should not be able to tell Americans how to vote, and if you live in Oregon, please vote NO on Ballot Measure 106.

Extra: Except for "NO GIRLS ALLOWED!!" all writing added by me (including the #MeToo t-shirt). The collaged photo and the printed sign are from the Catholic Sentinel, which the Archbishop has been filling with archconservative propaganda.