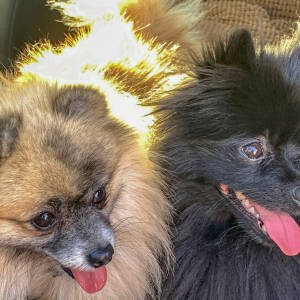 THEY have been out almost ALL day.  Apparently they had a special anniversary to celebrate, and they chose to celebrate without me!

They did explain that small black dogs was not allowed in cinemas, and if the weather had been cooler we would have all gone on a picnic, but as it happens the weather was not cool, in fact it was blinking hot - again - so they opted for the pictures instead.  They did go to see a film all about Mary Poppins Returning, and in which there was a small white dog, and I don't normally approve of small white dogs, at least there was a dog which was a blessing.  In fact they did say there should have been more of the  dog because it was super cute.

And after that they did go out for dinner - on their own and without me.

Eventually they did come home again, and I made them pay for it.  Yes I did.  I made her play with me for a whole HOUR.  I had lots of fun, but I'm not sure about her.