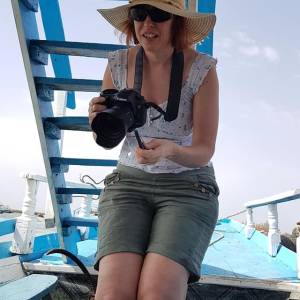 This building, in Leeds, won architecture awards. Called Broadcast Tower, it is next to the old broadcasting building - the little cream / beige building at its base. The new building is part of a complex which forms university accommodation for those at Leeds Beckett University.

I was in the city centre this morning with my youngest, who needed to buy a couple of birthday presents, but ended up with rather a lot of second hand films. Apparently it is essential to own every Batman film ever made....

In the afternoon I've made a banana cake, and gone back to a supermarket I used to use, tempted by a voucher they sent through. The experience was not great, and I ended up feeling irritated (I swear it has the rudest supermarket customers I've ever met), and possibly out of pocket, as it is clearly more expensive.