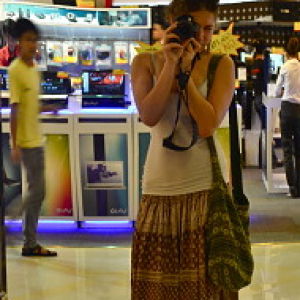 So I wrote a lot... sorry, it was a really interesting day!

Woke up with burning eyes, I think it may have been the fact that I had only slept 2 hours.

Had a busy and long day. Got picked at 8am up by a lovely tour guide at the hotel who we had pre-booked to take us around some sites outside the city.

We drove for an hour and a half until we reached our first destination: Ben Dinh Tunnel, part of the famous Cu Chi Tunnels. We drove first out of the city on what apparently was a highway. Scooters got their own lanes so that they could easily stop at the shops running along the road. I noticed that many of them were selling incredibly large statues or meter rock formations that imitated waterfalls and I thought to myself, who would buy that as I'm sure they're quite expensive... Also most people own scooters as the tax for importing cars is apparently 200%, so if you ever see a BMW, you know you're in the presence of a fairly wealthy person... According to the tour guide, 7 million people live in Ho Chi Minh with 4 million scooters! Crazy numbers considering Switzerland's population is 8 million...All that in one city.

We reached the Cu Chi Tunnels after a fairly bumpy ride through small villages, found it hard to catch any sleep as opposed to the tour guide who kept dozing off, his head flopping from side to side. The tour was extremely interesting, a must see if you're passing by. Long story short: The tunnels were first constructed when the french occupied the area. They went down 2-3 meters. When the americans arrived, the tunnels had to be constructed a lot lower as the americans arrived with modern technology, bombs they would drop down the holes, hence the vietnamese dug down to around 10 meters. Many people lived in the tunnels hence they constructed bedrooms, kitchens, knitting rooms, hospitals, weaponry and many more. They would use bamboos to get air and build vents for the smoke from the kitchens that came out miles away as to not give away the position of the kitchen. During the war, they would put pepper in these vents to mislead the dogs that were sent out to find the entrances. Apparently the dogs became so ill from this, that the soldiers that were in charge of taking care of them would refuse to let the officers take them into the field. Ok I feel like I'm talking too much, look it up though if you're interested, worth it.

Oh and I decided to go through one of the tunnels. Considering my height and the fact that I'm not a fan of tiny spaces, it's not something i'd do again but thought I'd give it a go considering it's the last time i might be here. Yolo right? Hate that word...

We then jumped back into the car and headed towards the temple of Cao Dai in Tay Ninh, near Cambodia. Cao Dai is monotheistic religion, originating from this very town. There are three teachings in Caodaiism are Budda, Sage and Saint. It's basically meant to be a mix of several religions. I personally don't have a chosen faith but I really enjoy learning about them. Read up on it if you're interested. The church was so intriguing: It had an eye within a triangle over everywhere, representing their 'god' watching over everyone, a unicorn standing on top of the world (representing power), a phoenix (love), dragon (luck) and tortoise (long life).

We were allowed to watch the midday service, where I took this picture of the man that was making sure no tourist entered the main room.

Had lunch in a restaurant run by a family. Had a little zen garden outside with some tables situated in trees. My mother pointed out that it was the women that sat at the bar, counted the money and checked the condition of the food before it was served. It was the father who was in charge of serving and entertaining the customers. My mother would gladly live here apparently.

On our way home, we stopped at a factory where disabled people were hired to create breathtaking objects using egg shells and sea shells. I bought a semicircular wine bottle stand with a design of a dragon made of sea shells. It's amazing knowing its completely hand made, they fasten the sea shell and cut the tiny designs out of them, such intense manual labour.

Slept on the way back home. Long but great day.