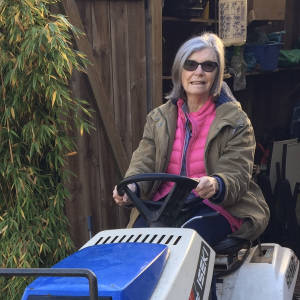 Where did today go? All the things I intended to do remain undone. I did a few chores, and a bit of sewing. And that's it.

TM is away and it was a quiet day - apart from half an hour around six pm when I was preparing to light the stove. I was cleaning the glass and failed to notice that Douggie was attacking the roll of kitchen paper on the floor behind me - clawing great lumps out of it. I went to put the debris in the kitchen bin and found the remains of a wee bird which Percy had brought in and played with - feathers everywhere in there. I don't think he caught it. I heard the sound of a bird hitting the  dining room window while I was laying the fire, and I think he just nipped out and brought it in. I lifted up the mats to shake them outside, to discover it was snowing!  And I had washing out .......

All calm now. The picture is for the Tiny Tuesday challenge, theme 'mystery object'. I'm afraid it won't take anyone long to work it out. And apologies for the hair, which definitely shouldn't be there.

Thanks to dfb24 for hosting the challenge.