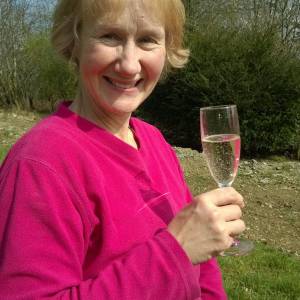 A great day of surveying. The sea gradually calmed and we ended up with excellent whale spotting conditions. We saw endless pods of dolphins,including Bottlenose, Common and Striped. The Striped Dolphins are great fun to watch as they are very acrobatic and love to leap and splash!
After lunch the Chief Officer, Barent, took me on a tour to the bow of the ship. This was rather adventurous as we had to walk along under the containers where we could look down into the rushing sea, and then peer through an opening to the very front of the ship to look for dolphins. Sadly, there were none at that moment. Barent has been very friendly all voyage, and even let me go inside the ‘freefall lifeboat ‘, which if you are a fan of the excellent film ‘Captain Phillips ‘ you will know is pretty awful! It is in fact worse than it looks as the steps inside are almost vertical and only a few inches wide! He was delighted to tell us that our seats would be right down at the bottom of the lifeboat . I can’t imagine getting into it in an emergency so let’s hope we never need to!
The ship has a trainee cadet, and it was decided to show him how to ‘calibrate the compass’. This involved steaming in a huge circle which took around half an hour. (See extra for the track on screen). I am not sure how it affects our scientific survey but we were delighted as we were in a superb area for Fin Whales and had a wonderful view of two which were possibly puzzled by the manoeuvres! The whale blows continued on into the evening but we eventually had to leave the bridge as fatigue was setting in!